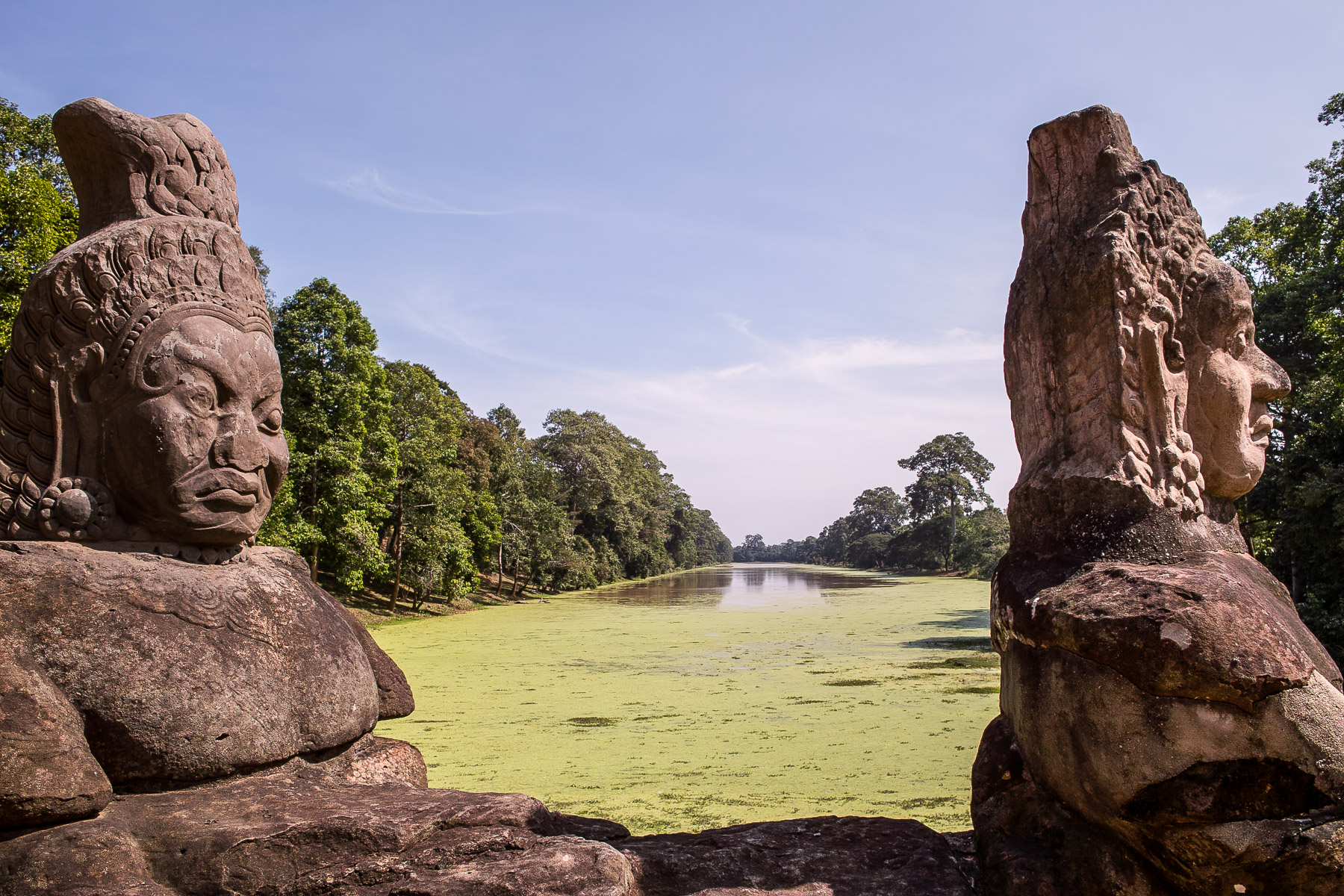 The Kingdom of Cambodia

The border crossing between Vietnam and Cambodia was like being in an old movie: dragging my luggage for kilometers on unpaved, country road, along the Mekong River.

In the evening I arrived at Phnom Penh, the capital of Cambodia. I took a walk on the streets and visited a market. No foreigners at all. I tried some grilled fish under the incredulous eyes of the locals. Not bad.  I stopped for a beer and a chat with the locals on the side of a busy road. It was funny to see women wearing pyjamas on the street in a central area of Phnom Penh!

Night came and looking after my hotel I noticed the streets were deserted except for a group of prostitutes and a nearby group of policemen. I entered a club to ask for directions. Inside, starting from the door, on the left and right sides, were about 16 women, nice dressed, and who couldn’t speak English. Later on I was told the club is for locals. The client pays for the room and drinks. Inside the room the client sings karaoke surrounded by beautiful women! That’s all.

Next day I visited the Killing Fields and the S-21 prison. There are no words to describe what happened there. In just four years, between 1975 and 1979, at least 1.7 million people were killed by the Khmer Rouge under the Pol Pot regime.

It is heart breaking to walk between the mass graves of the Killing Fields and to actually step on the old clothes of the people killed there. After rain, pieces of clothes and bones resurface even now.

The torture at the S-21 prison was unimaginable. Everything was used. One method was to hang the prisoner upside down until he loses conscience. After this his head will be immersed in a fertilizer solution to quickly regain conscience, so the interrogation can continue.

It is hard to see the photos of prisoners before and after torture: children, adults, elders. The Pol Pot regime killed the children of the prisoners so they cannot seek revenge when they grow up.

Also I visited The Royal Palace and the Silver Pagoda.

To go from Phnom Penh to Siem Reap I took a 7 hours ride with a local bus. Live chickens also shared the space in the bus. Not too bad, except for the traditional Cambodian music played over and over on a TV screen.

The bus stopped a couple of times for break in small villages. Vendors were trying to sell Tarantulas (black spiders the size of a palm) cooked in normal or spicy sauce or even alive, cockroaches and tortoises filled with something like small yellow eggs! I watched the tarantulas until the bus left, wondering if I should try it…

Siem Reap is one of the most popular destinations on the planet now. It is a small town, close to the temples of Angkor.

Angkor Wat is the largest religious structure in the world. It took me two full days to visit the nearby temples by bicycle, plus one day with tuk-tuk to the beautiful Banteai Srei.

The temples replicate the spatial universe in miniature. The one I like the most, the Bayon, has 54 Gothic towers decorated with 216 enormous faces.

Parts of the old ruins are “hugged” by big tree roots that give the unique charm to the Angkor temples.

What I Didn’t Try

← Back in Time in Mekong Delta
Travel Buddies →